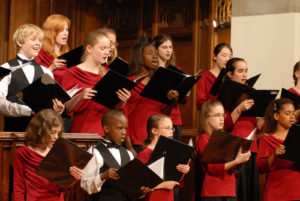 See where YpM has performed:
Performances and Events
Venues
Serving the Community

Youth pro Musica: The Greater Boston Youth Chorus (YpM) has introduced the joy and fellowship of choral singing to generations of young people.

YpM attracts members from all over Greater Boston, uniting young people from different communities based on their shared interest in music.

Youth pro Musica has appeared in some of the finest concert halls in the Boston area and beyond.

Through forty seasons of outstanding choral singing, YpM has performed with the Boston Symphony Orchestra (at Carnegie Hall, Symphony Hall and Tanglewood), the Boston Pops, the Tanglewood Festival Chorus, the Boston Camerata, the Masterworks Chorale and the American Boychoir, and has appeared on National Public Radio and television.

YpM is committed to serving the community as well. Members have performed at hospitals, nursing homes, libraries and benefits for organizations such as the Salvation Army, Oxfam, Santa’s Kitchen, Pitching in for Kids, and MUSE (Music Serving the Elderly).

Youth pro Musica celebrated 45 years of excellence in choral training in 2017 at its 45th Anniversary Concert and Alumni/ae Reunion.

Youth pro Musica was founded in 1970 as the children’s branch of Boston’s Chorus pro Musica by Director Emerita Roberta Humez, a charter member of that organization. Mrs. Humez directed YpM for its first 25 years, establishing the group’s commitment to new music and reputation for outstanding musicianship and professionalism.

In 1995, Mrs. Humez passed the baton to Hazel Somerville, who directed YpM until 2003. During Mrs. Somerville’s tenure, YpM welcomed boys with changed voices. YpM also helped its Dorchester branch to incorporate on its own as the Boston City Singers.

YpM was pleased to welcome Robert Barney as Artistic Director in 2009.

© Copyright - Youth Pro Musica - All Rights Reserved 2023
Back To Top